Tutorial Installing and using Piapro Studio and Vocaloid on Linux

Overview Reviews (1) Discussion
Hi. I'm SeleDreams.
I've started making original music using VOCALOID a while ago, and since I moved to Linux, I didn't really have a native option to use the voicebanks I paid for.

Thankfully there are multiple ways to work around it.
The one I am going to teach in this tutorial is my favorite and the easiest for non tech savy people as it allows to use vocaloid voicebanks almost natively without having to do additional manipulations everytime you want to use one.

General Step 1 - Setting up your files
For this step you will just need to create a "Vocaloid" directory in your home folder.

General Step 2 - Installing Wine
Start by launching the command line interface, it will only be done once in order to install Wine.
You can use the shortcut CTRL+ALT+T to open it directly or you can search for "terminal" or "konsole" in your applications.
Once started here are the lines you will have to type to install it.

if your pc is 64 bits, start by typing this in case the 32 bit apps support is not enabled by default.
sudo dpkg --add-architecture i386

then do this step by step :


Code:
once it is done, wine should start and open a window looking a bit like the file explorer of Windows Systems. 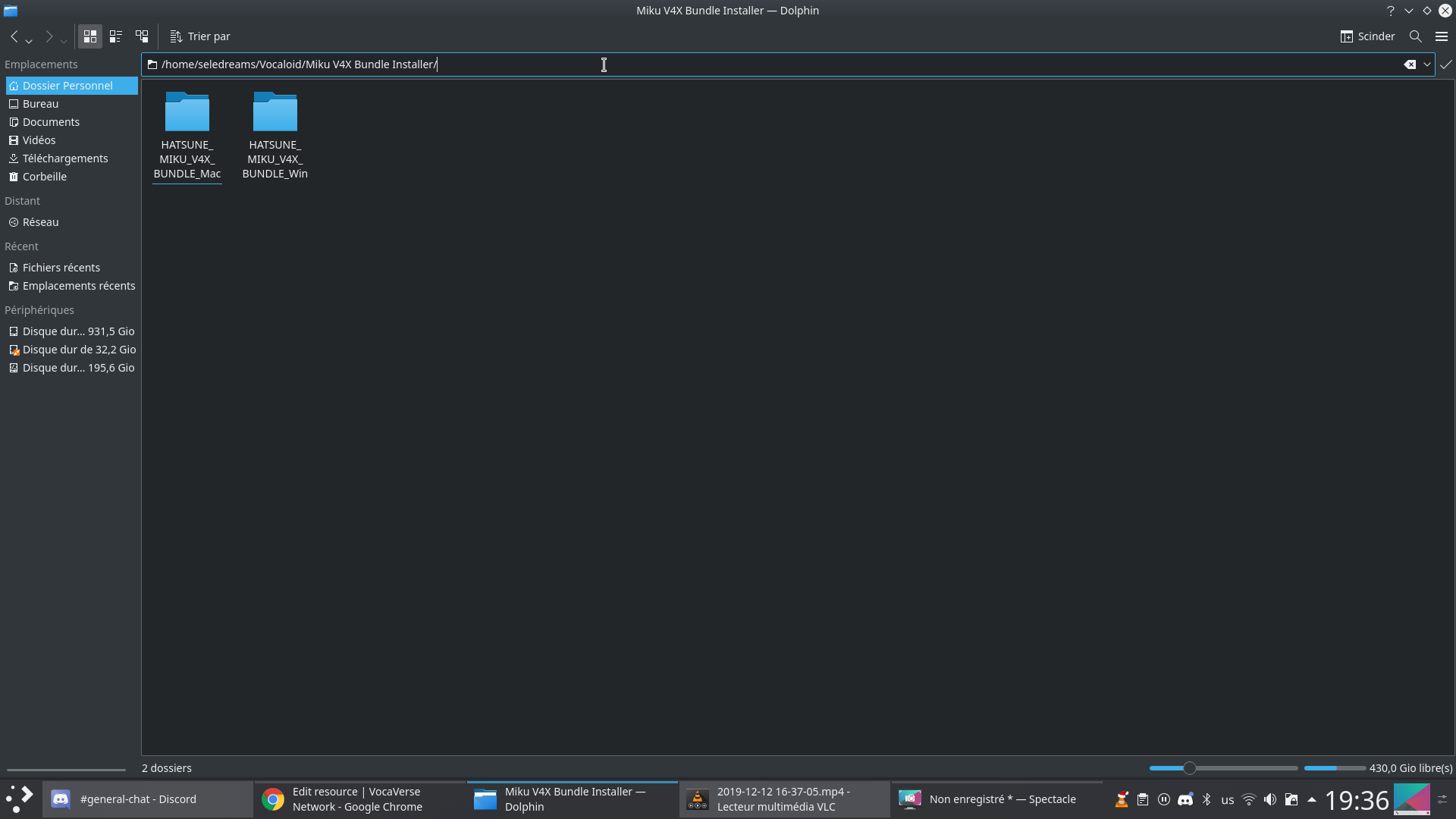 From the Wine Explorer, click on the '/' on the left panel, then on the right panel double click on home then on your user name.
From there, you can open on the Vocaloid directory we created earlier. 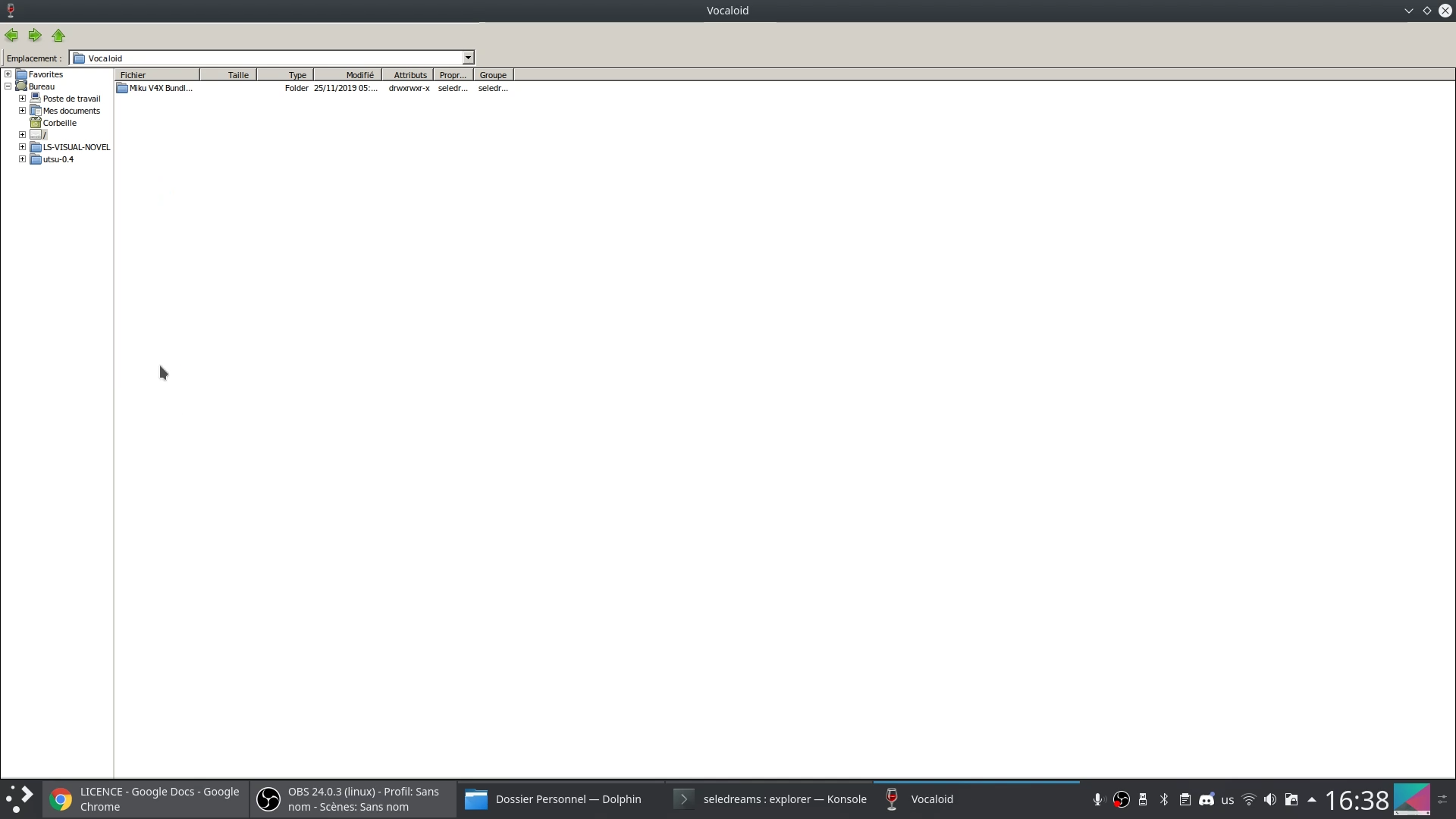 Once done you can open the directory containing your Cryptonloid and Piapro Studio ( if there's both a mac and win version, chose the win version). 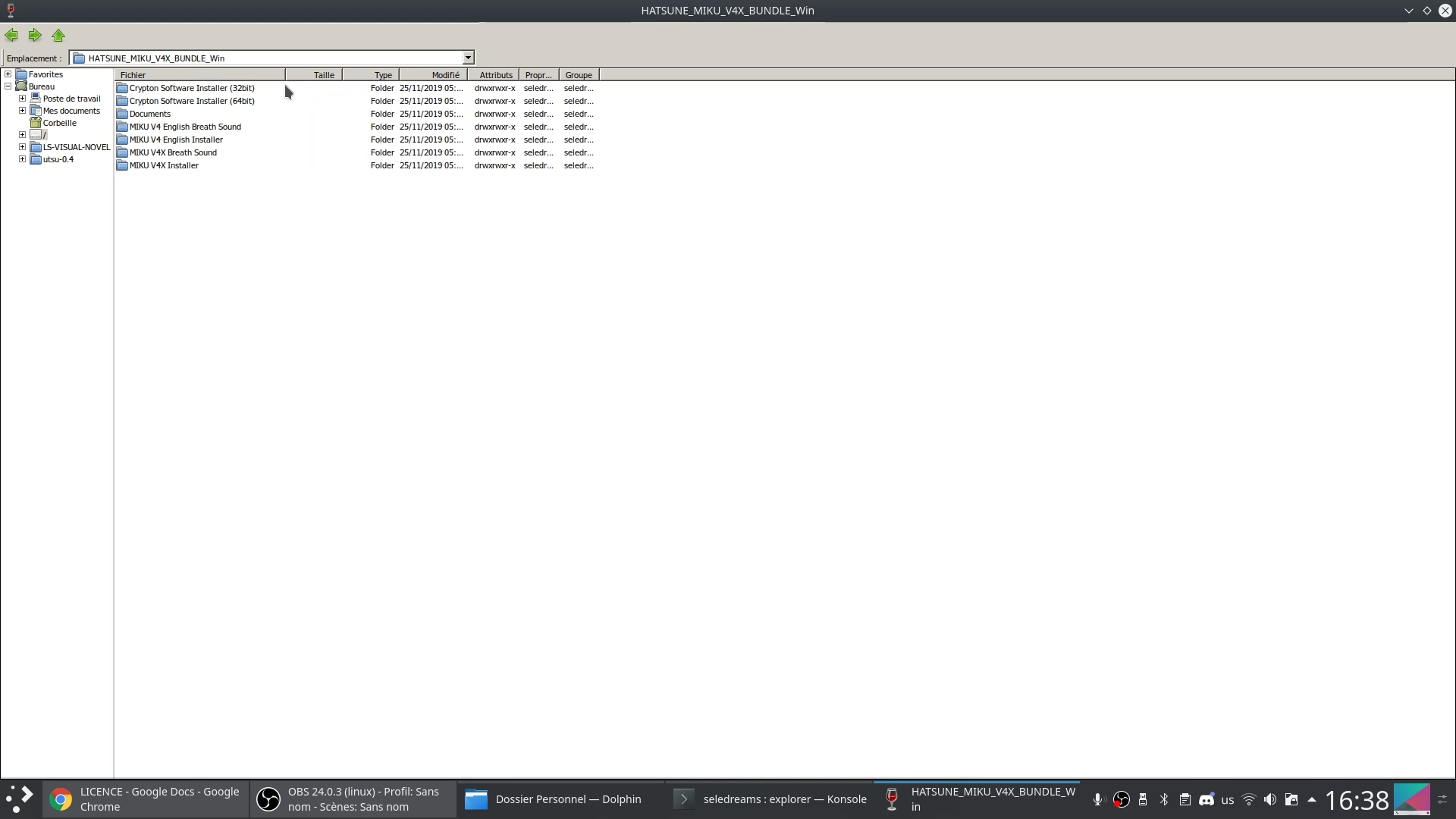 First go to the "Crypton Software Installer (32bit)" directory and double click on setup.exe (don't use the 64-bit one, Wine doesn't work well with 64-bit programs) 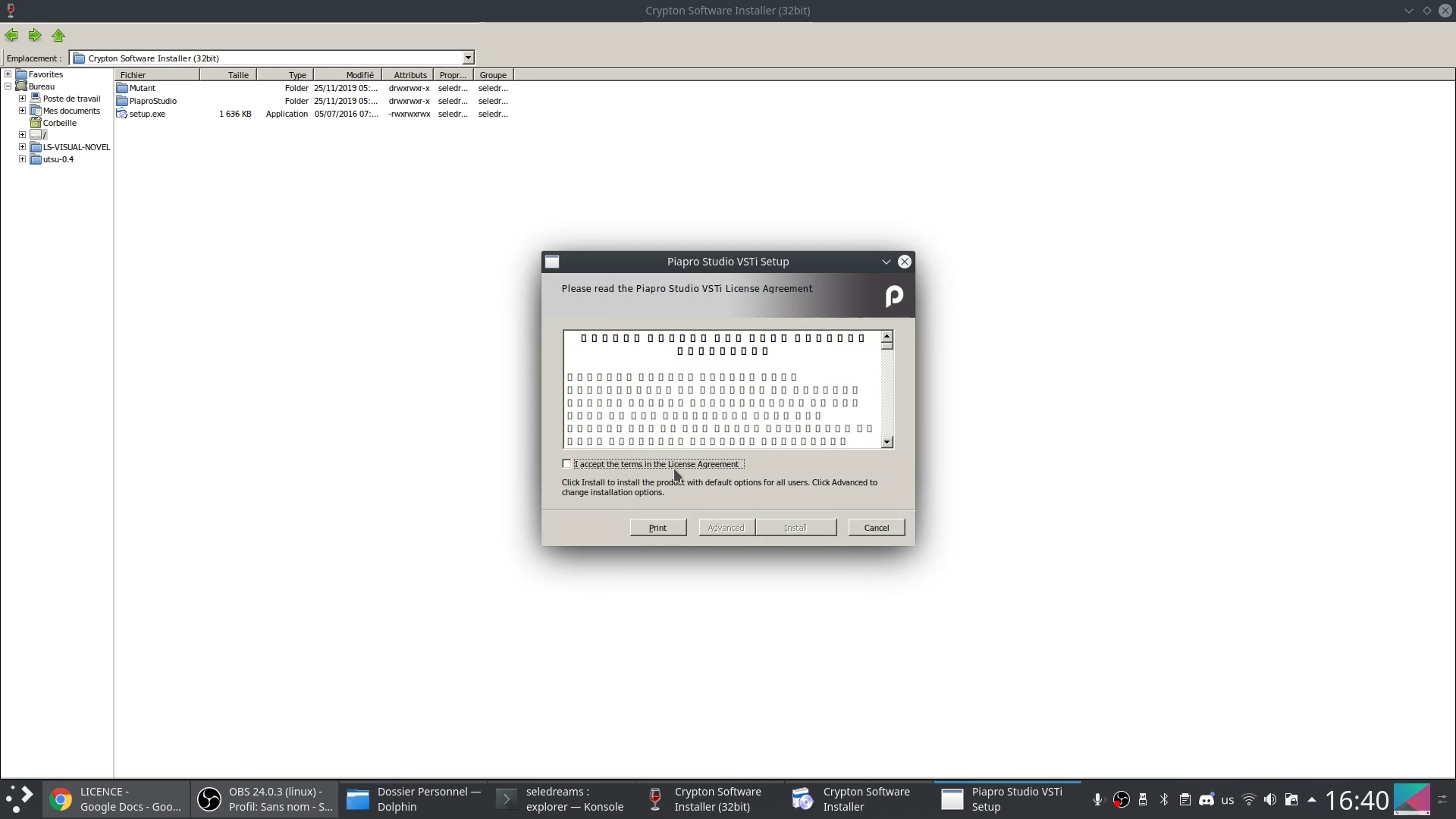 It will open it like on windows and you will just have to follow the instructions.
The end user licence agreement may not appear properly (it may only display empty squares) but except that, the installer works without issues. 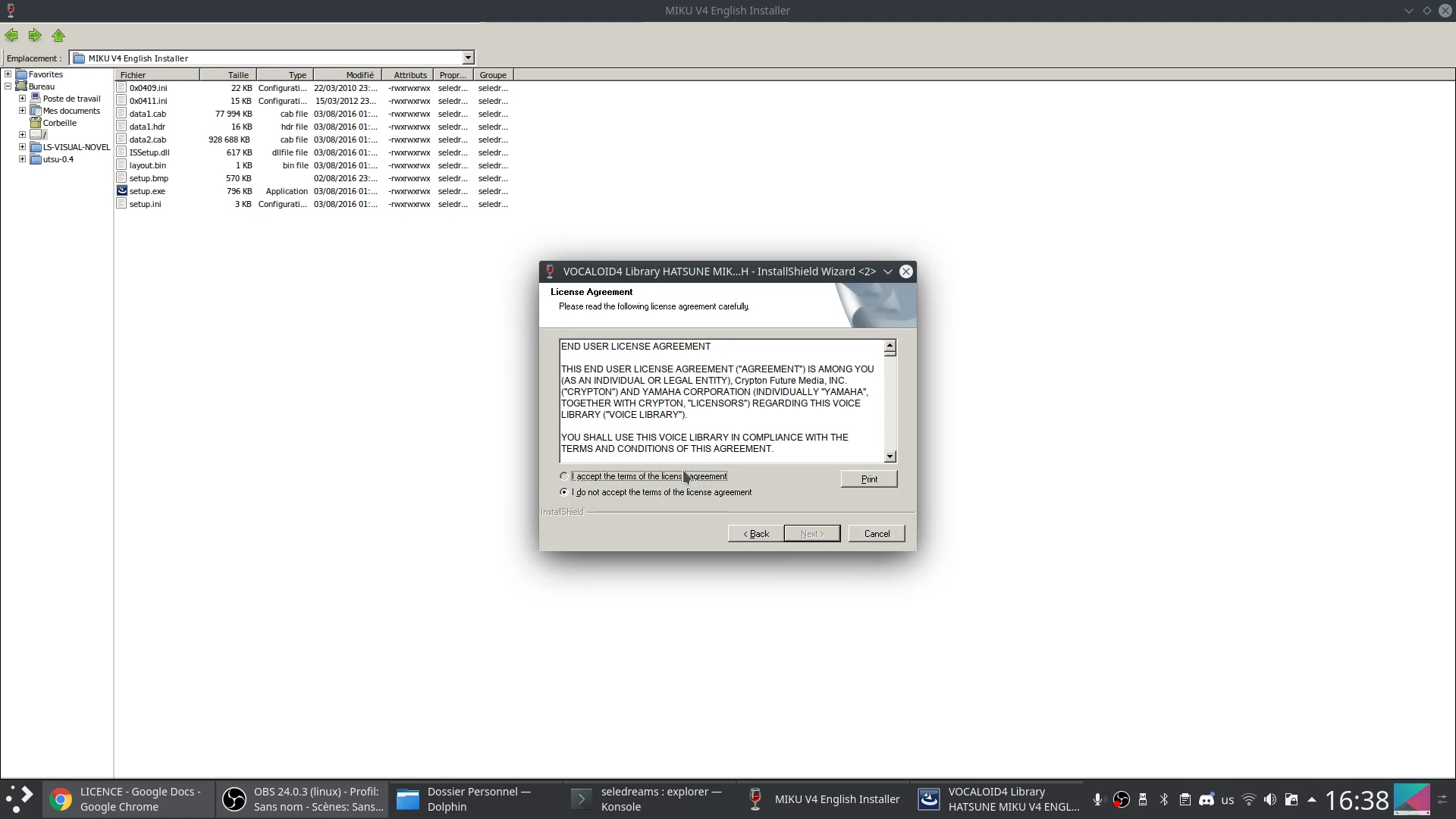 After that, copy and paste this on the top bar of wine explorer (like an url) in order to directly reach the Activate4 directory.
C:\Program Files (x86)\VOCALOID4\Activator
Here, you can double click on Activate4.exe and follow the procedure to activate your voicebank. 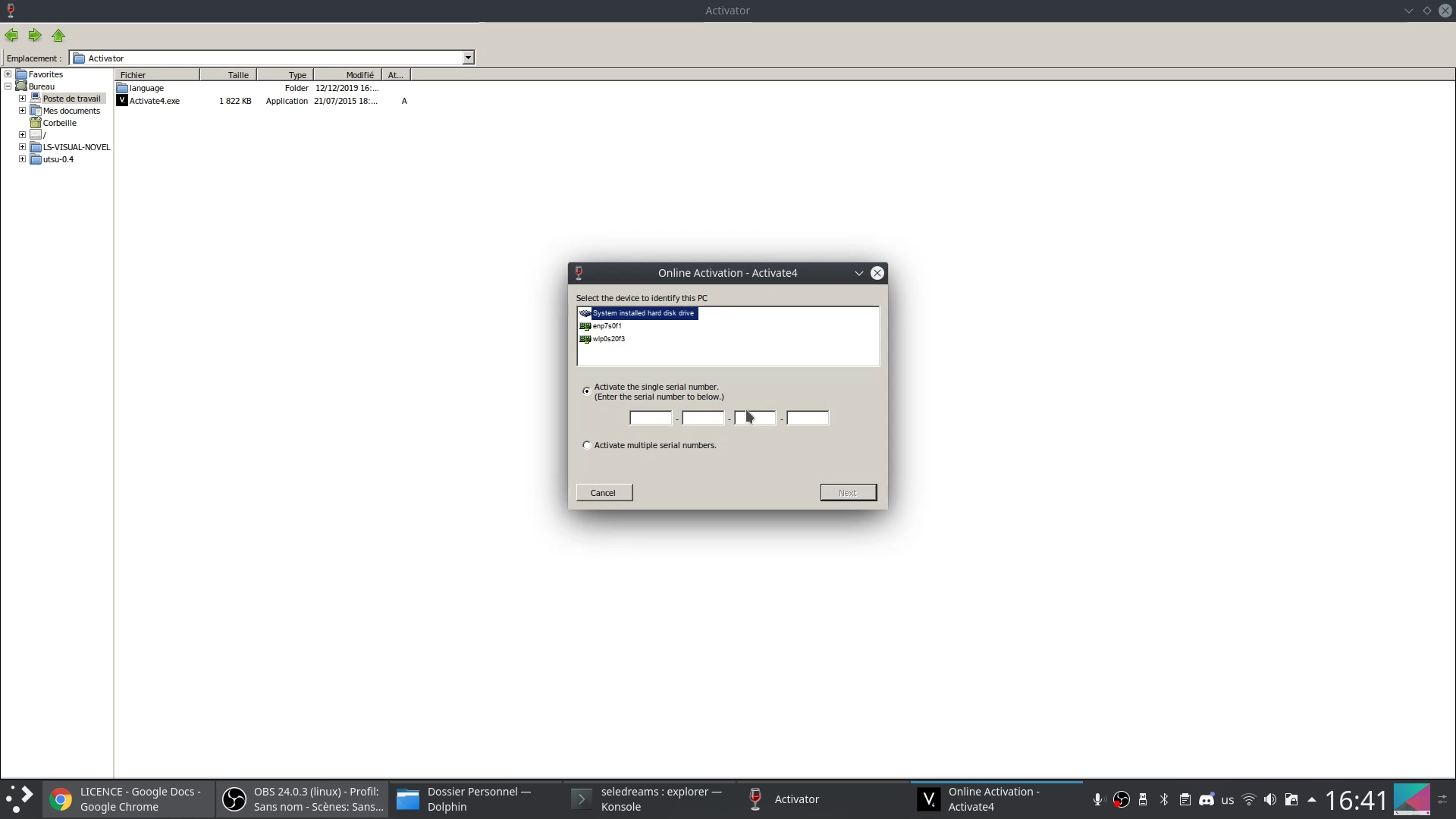 First of all, you will have to install the DAW named LMMS. It is the easiest option to use VOCALOIDS on Linux, it is possible to use others DAWs but they require an aditionnal step that I will explain later.
LMMS | Download

(to install it just double click on it and your distribution should suggest to install it, just click yes)
once installed, launch it, it will ask for the first time setup such as file paths etc.
Set the VST file path to
/home/seledreams/.wine/drive_c/Program Files (x86)/Vstplugins 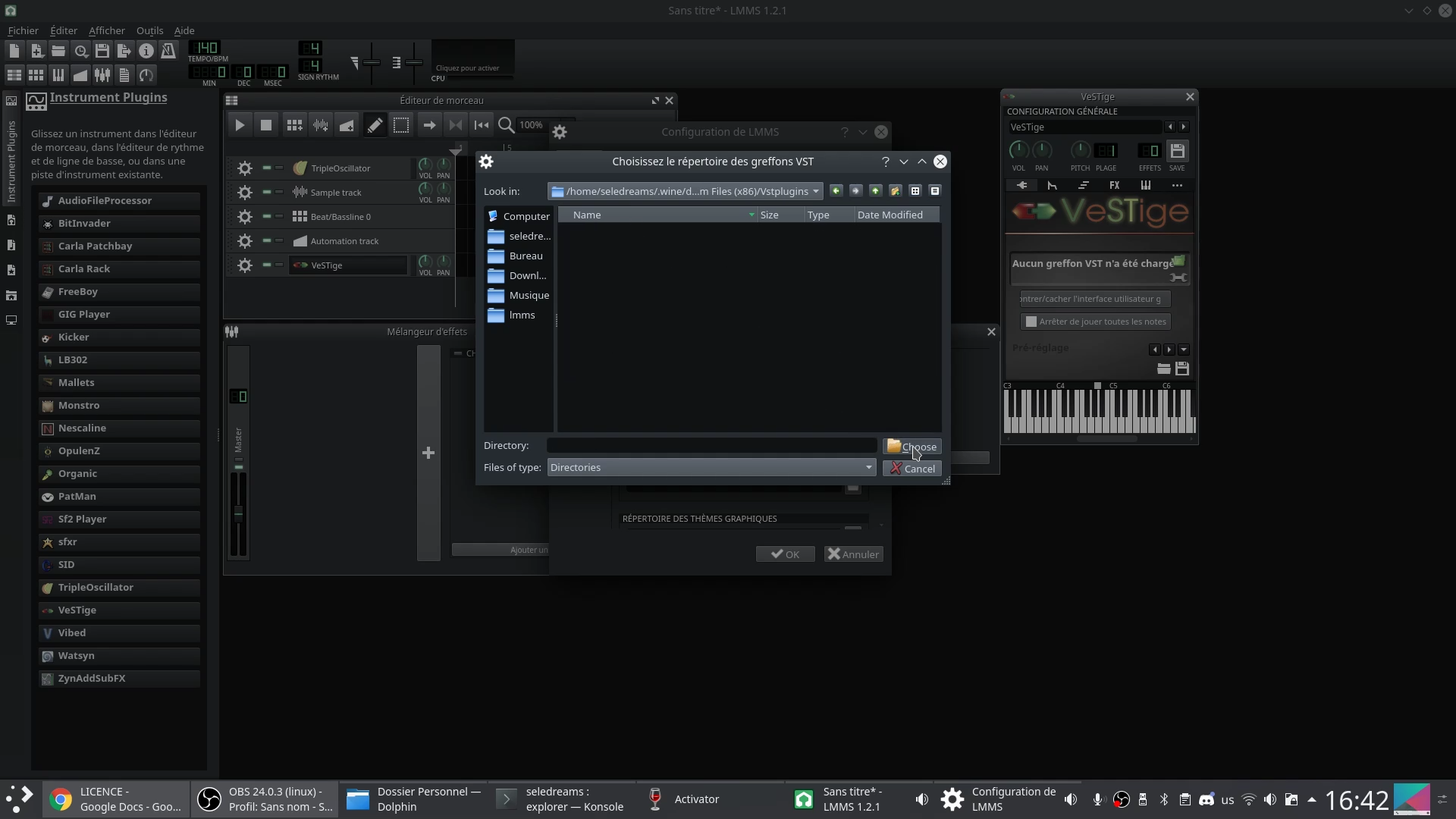 then apply the settings. 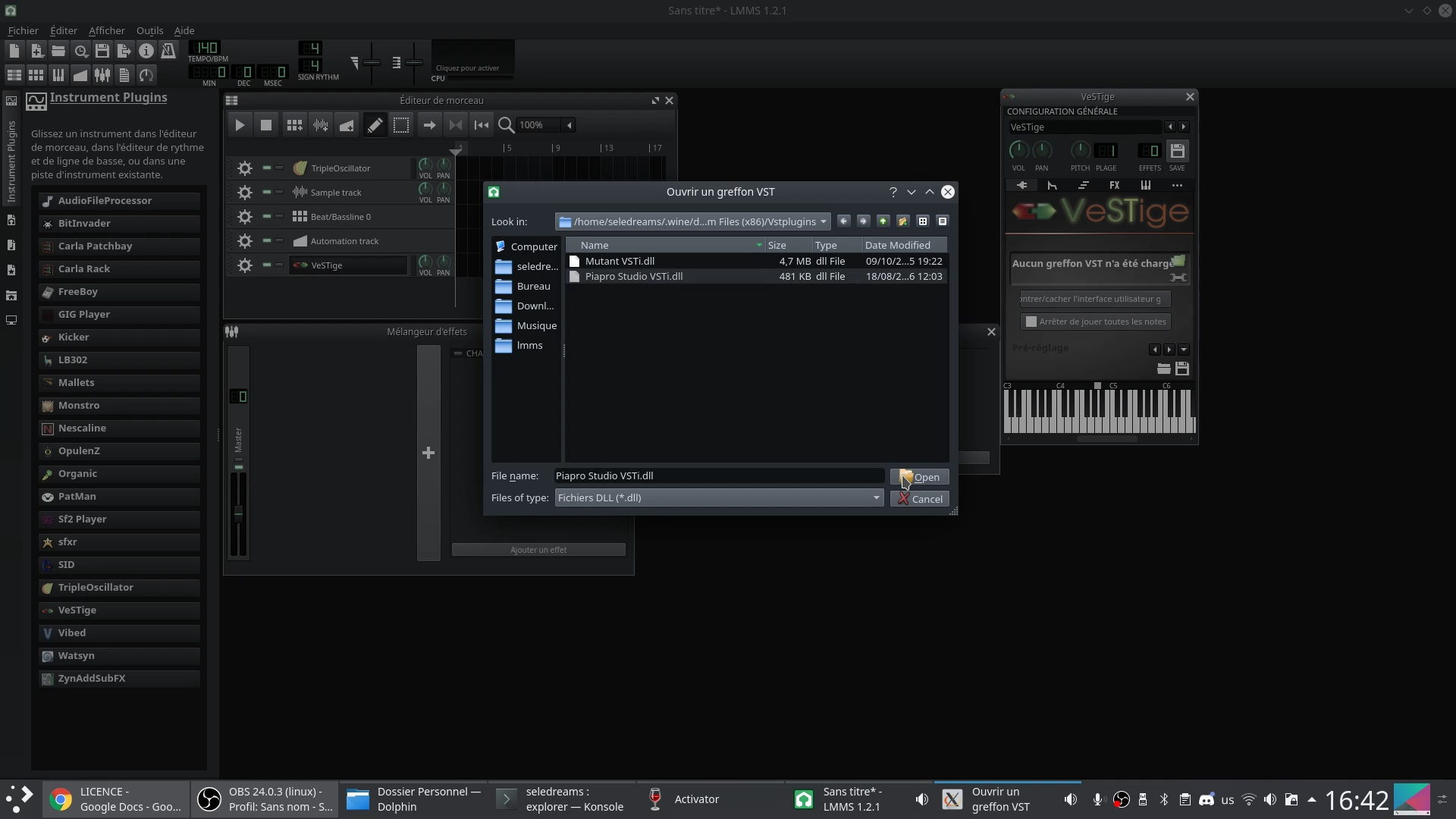 It may ask to update, just say yes, and it will update properly. 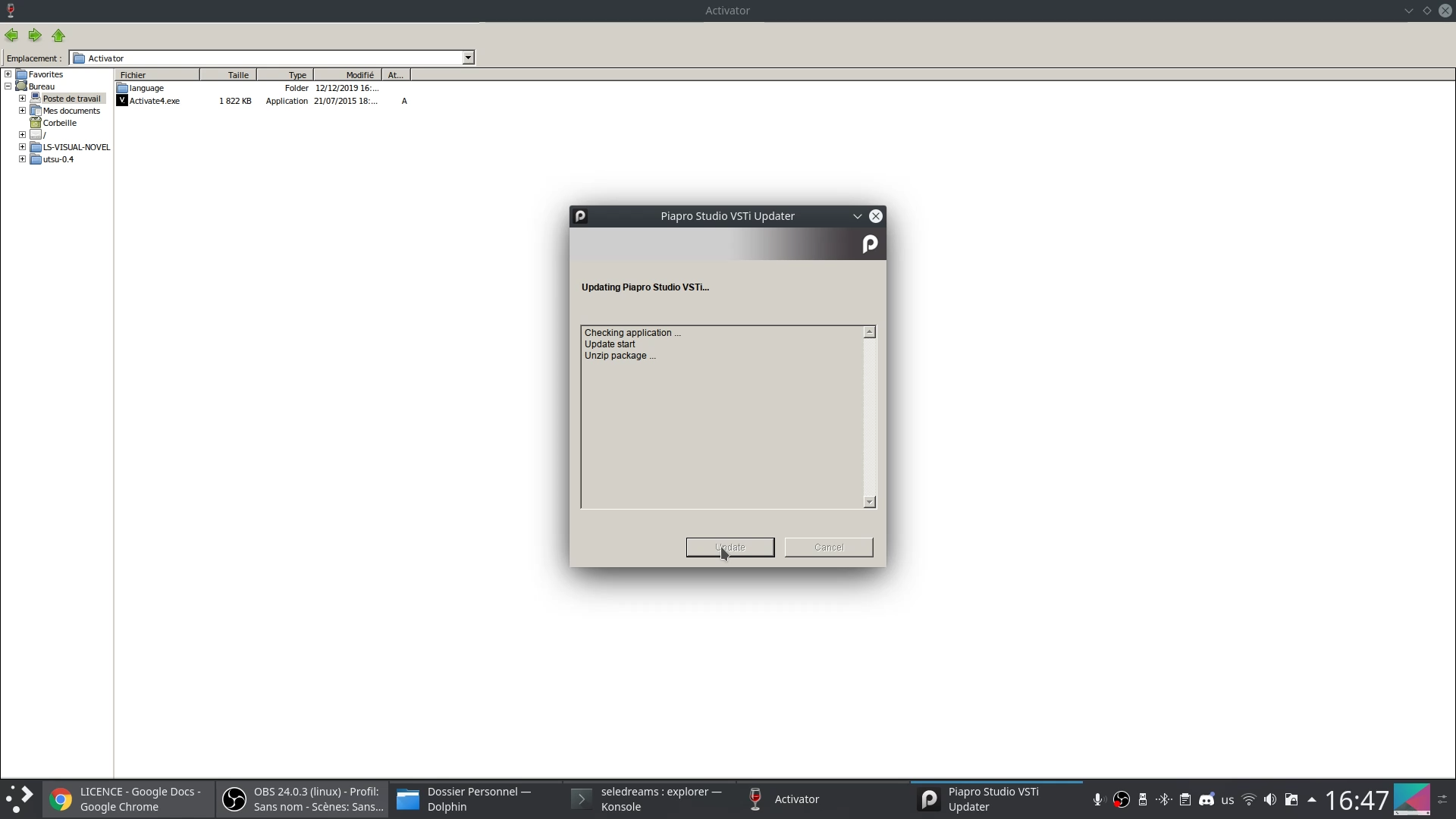 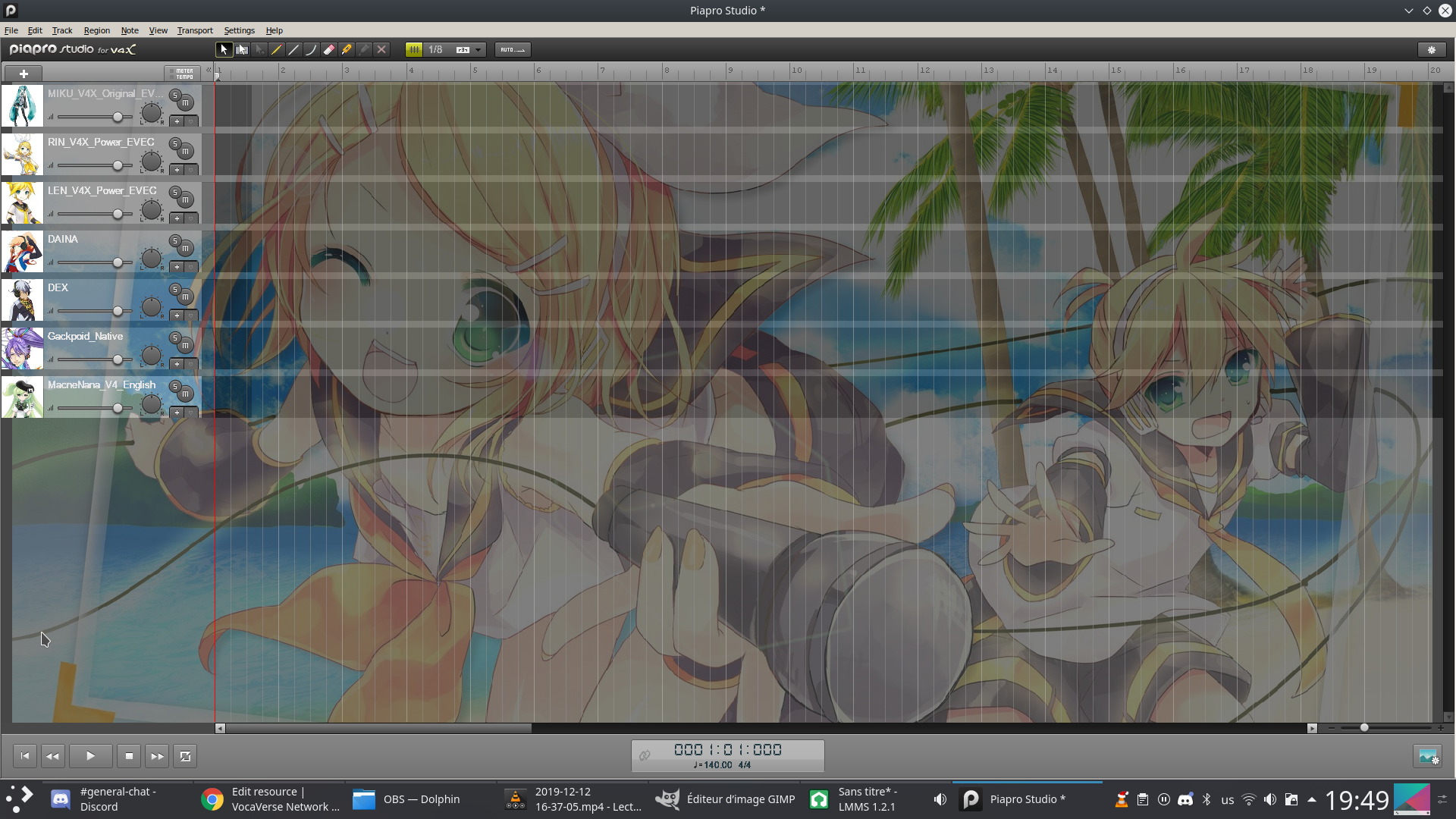 WARNING : DO NOT SAVE YOUR PROJECTS ON THE LINUX FILESYSTEM SUCH AS THE DESKTOP ETC ELSE THEY WON'T GET SAVED AND YOU WON'T BE ABLE TO RECOVER THEM
SAVE IT IN THE VIRTUAL C DRIVE NAMED drive_c (you can save inside directories in this virtual drive with no issues) 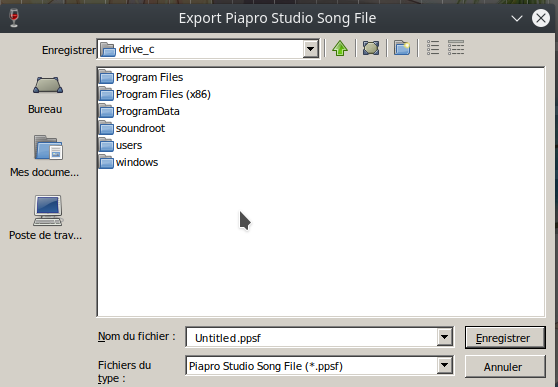 To activate on Piapro Studio third party voicebanks, it will require a trick I'll explain later in order to allow piapro studio to open the browser link activating them.

This tutorial is a work in progress, the rest is not ready yet and screenshots will be added.
Reactions: BubblyStar, Jisenku and Kazumimi

This is very useful. Thank you for your post!
Read more…
Top Bottom