I was wondering if the mods would consider adding a Japanese-language category to Discord?
In the category could be 2+ channels related to learning Japanese.


SUGGESTIONS FOR WHAT TO IMPLEMENT:
CHANNEL FOR THE KOTOBA BOT (LEARN/PLAY WITH KOTOBA): 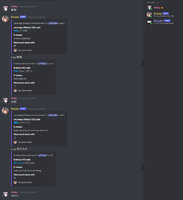 I'm studying Japanese in university right now and would absolutely love to study alongside you all! My schedule is absolutely packed so I don't think I'll be able to join any read-alongs anytime soon, but would still like to try to speak casually with people.
Reactions: CdrSonan, uncreepy and kozet
Show hidden low quality content
You must log in or register to reply here.
Share:
Facebook Twitter Reddit Pinterest Tumblr WhatsApp Email Link