(I wasn't quite sure where to post this, so I apologize if it doesn't fit here)
An infographic showing all the vocal synths (and other closely related characters) and how they are connected to one another.

A bit of background:
Ever since I found the Evillious Chronicles nearly a decade ago, I'd been interested in seeing how interconnected all the characters in Vocaloid were, and if they were at all related to other synthesizers. As my scope of knowledge grew, I came to realize that the world of Vocaloid that influenced my early teen years was in fact only a chunk of the synth world that was out there. And so I made this infographic partly as a personal project and partly so that maybe some curious newcomers can check out how vast this vocal synth thing really is.
I apologize for the absolutely massive image size, but honestly I don't think I could've made it much smaller.

In this infographic I've included:
-All the (known to me) vocal synths: Vocaloid, Voiceroid, Piapro, UTAU, SynthV, CeVIO, Neutrino, SINSY, Muta, DeepVocal, NiaoNaio, AISingers, Chipspeech, Alter/Ego, Vocalina, Voidol, and X Studio
-Various related platforms/software related to vocal synths: MikuMiku Dance, FL-Studio, Jam Band, Cantor, and more...
-Other characters than are not specifically vocal synths themselves but are related to a character who is a vocal synth (by one degree of freedom; for example Zunda Horizon is an anime series that includes the Tohoku sisters, as well as other characters who are not vocal synths but are included here, but even though Nekomura Iroha is made in collab with Sanrio I did not include Hello Kitty because well, it's not really relevant to what I'm trying to show here)
-I've grouped characters both by type and by company, with some crossover. The colours generally don't mean too much except for the thick yellow lines that separate each type of vocal synth (Vocaloid, Voiceroid, etc). Translucent white lines connect the same character through different types (like Kizuna Akari being both in Vocaloid and Voiceroid) 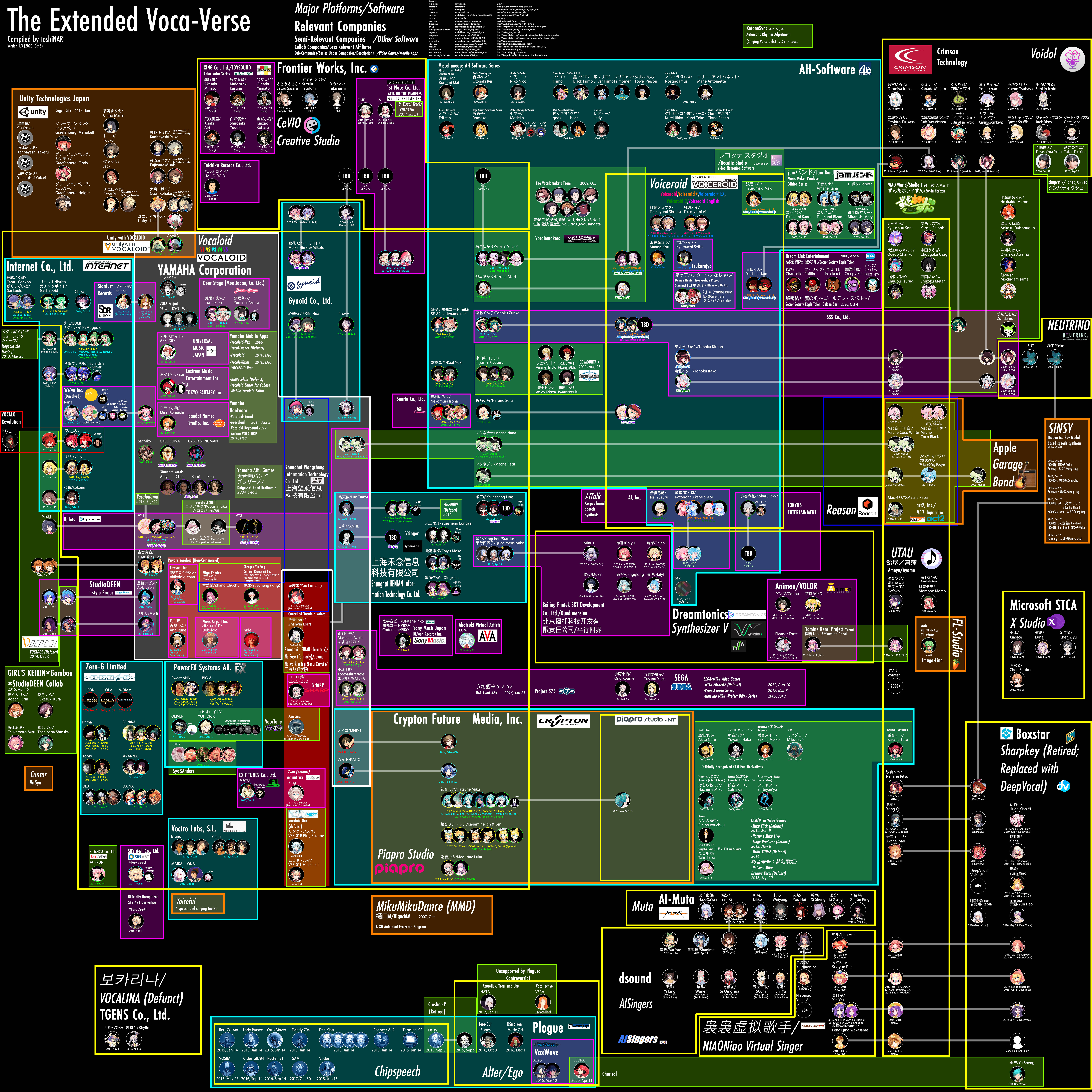 The current version is 1.3 (completed on October 5th, 2020). In no way is this conclusive; I'll constantly be updating it as new things gets released. And I'm also aware this may not be 100% accurate. If there's anything wrong or if I'm missing anything please let me know and I will do my best to fit it in. Thanks for viewing!

Notes (things that need to be changed but haven't been yet):
-CeVIO AI and Tohoku Kiritan to be released winter 2020
-Synth V AI, along with its song voice banks for Koharu Rikka, Saki, and Genbu to be released Spring 2021
-Koharu Rikka talk voice to be moved to CeVIO AI; she will not be a voiceroid
-Otomachi Una's Voiceroid2 bank has been announced
I plan on (if not completely, at least partially) remaking this graphic; with these above announced changes it is not possible to neatly connect them using this layout. It'll likely be done in December or early 2021.

This is great, ill make sure to look into this more. These are all good character designs, this is just- - - - - i feel speechless. Its amazing how you made this.
Reactions: toshiNARI, TheStarPalace and uncreepy

Awesome job on this! The next person who asks 'What is Hatsune Miku from?' is going to get their mind blown.
Reactions: andantina, toshiNARI, TheStarPalace and 1 other person

A few things on the DeepVocal part - Feng Qing Wakasame was only part of Sharpkey, and Xia Yezi's vocals were actually released in July last year. In terms of SynthV, Genbu should be with AiKO as firmly Animen-made vocals, and Eleanor and Renri should be in a similar space as they are managed and distributed by Animen (also known as VOLOR as noted on the chart). Under Quadimension also needs to be added Muxin and Xingchen Minus for Synthesizer V vocals.

@xuu thank you for the info! Do you have a source for these? Particularly Muxin and Xingchen Minus; I had no idea they existed for SynthV (I can't read Chinese).

EDIT: Ah I’ve found the info on Synth V’s website. Looks like the actual character reveals were extremely recent stuff. I was aware Synth V was making new VBs but didn’t know they’ve fully announced the characters yet. Thanks for the heads up!
Last edited: Sep 11, 2020
Reactions: xuu

it must've taken ages to make this, you have my utmost respect!
Reactions: toshiNARI

For what I read, Tohoku Itako will be release her NEUTRINO voicebank on the 18th!

So I guess there are no people covering this, and yeah, I made this thread. There's a new, deep-learning-based voice synthesizer called Neutrino. Developed by Shachi, and released freely to the public since yesterday. It's kinda different to use, so you must prepare a MusicXML file to be...

Some things to note:
As of today (Oct 30, 2020) this infographic has some glaring mistakes, particularly with the SynthV and CeVIO sections. With the news dropping about Tohoku Kiritan and Koharu Rikka, I'm gonna have to rearrange the entire graphic to somehow be able to connect them to the CeVIO section half a page from the Neutrino and SynthV sections. For now, just make a mental note that these two complicate things and really turn this into a crossover web to end all crossover webs. And I thought that dealing with the Flower/IA/Yukari collab and the Voidol stuff was stressful enough, now honestly I have no idea how to make Kiritan and Rikka work. Any suggestions would be appreciated.