Here is her new design: 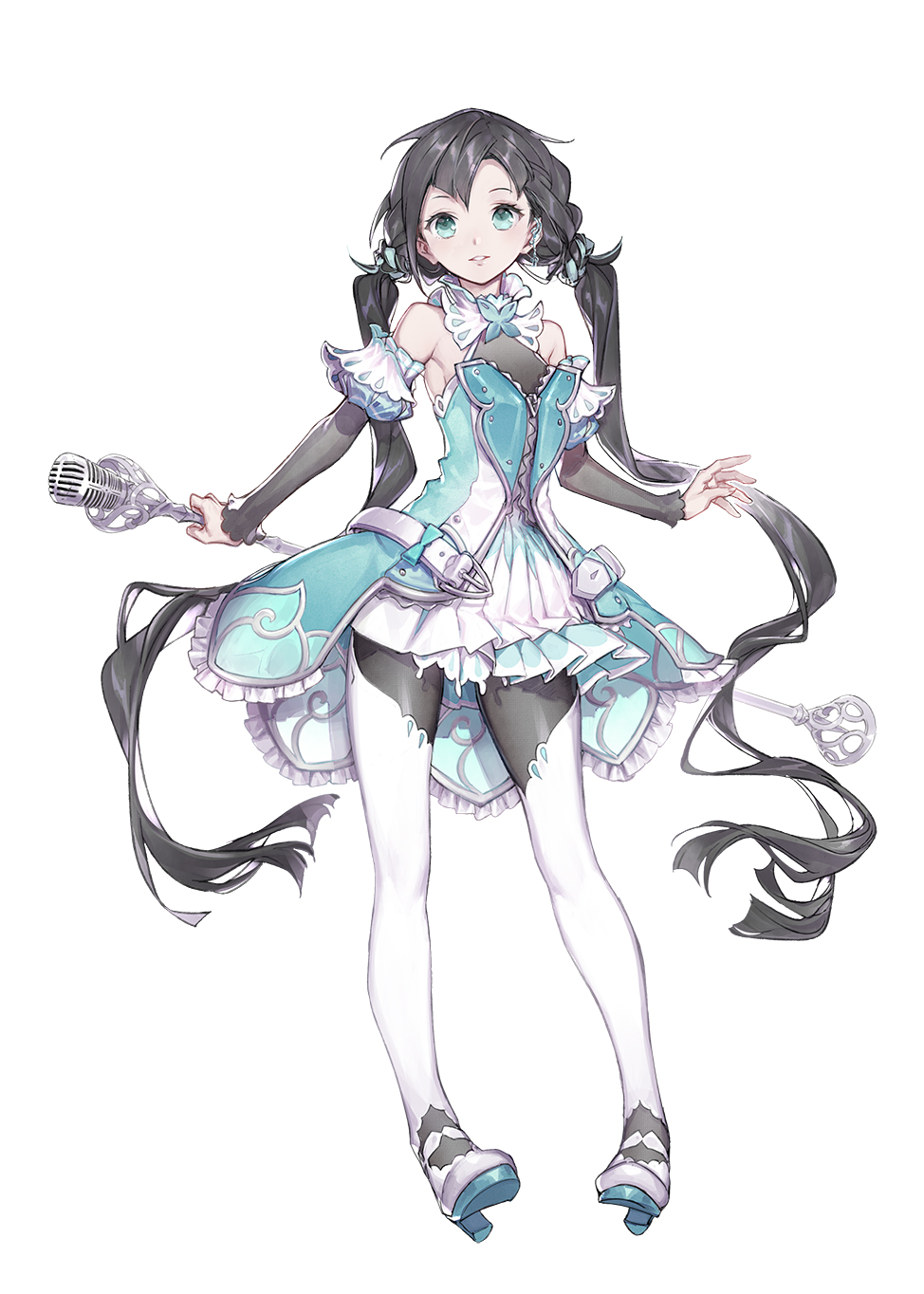 Voicemith has also stated that overseas users are allowed to contribute.

She was an utau released around 2014. Samples of her voice are here:

EDIT: They actually did not specify which engine she will be on. I simply assumed SynthV. Title edited to omit the engine.

Very strange of them not to mention the program, we haven't seen this before in any SynthV crowdfunds.

If they are producing her for ACE, Western users might not have easy access to the final product, making it hard to know whether or not to contribute. I hope it goes well and we're able to hear what her voice sounds like with AI.

I've noticed the Tweet that originally had the Caesar cipher that could be decoded to mention it was supposed to be a SynthV AI voicebank ("YAO Synthesizer V AI" was the decoded result) has been deleted, which is curious. I wonder if they were getting too far ahead of themselves with that one and got told off for it...

I do still wish her luck, but I'm personally a bit unsure if I'd back something that doesn't want to state what engine it'll be on now (or what they're aiming for). I'd hate to give money for something I might be unable to use in the end if plans suddenly changed behind the scenes, haha. I am digging the magical girl look, though.

edit: In the crowdfund's FAQ page, one of the questions is if there'll be English or Japanese, and the answer mentions the AI having "Cross-Lingual Synthesis". So... that still sounds like SynthV? They just can't name drop it for some reason skdgh
Last edited: May 31, 2022
Reactions: poser and TheStarPalace

I love her new dress and art; her hair bangs are cut a bit weirdly though. The website has no mention of which engine she will be on, so I speculate two possibilities:
I pray it's not the latter. Other Dreamtonics-approved crowdfunds had no issue with mentioning what engine the voicebank was going to be on. Wouldn't VOICEMITH also mention if Xia Yuyao AI was going to be made for ACE?

Maybe they want to have a shot at developing her for SynthV first. If Dreamtonics ends up not approving her, they will go for ACE instead.

I'm not personally interested in her voice, but I wish this project the best. She's really pretty, and more established characters getting into SynthV brings more attention to the engine.
Reactions: TheStarPalace

I'm gonna pass on this crowdfund, but I'm looking forward to seeing how things turn out!

They probably teased what engine she's on WAY too early, given that they had a cipher hint tweet that they deleted after, I'm guessing they wanted to build up hype with it (audience-involved teaser where you have to solve it... p clever!) but PR problems happened and it got posted early. I doubt it's anything contract related though cause "what engine will she be on" seems like the kind of detail you have to lock down first before launching a very in-depth crowdfund.

Bet, in like a few weeks, they're gonna repost that cipher hint like "oh?? what's this? a new hint? GASP!" and we have to pretend that we didn't know LMAO

Yeah, they spoke too soon prolly, but it's dead obvious it's SynthV

Oh wait that second one, duh! Only SynthV does that

PearlStarLight5 said:
Oh wait that second one, duh! Only SynthV does that
Click to expand...

afaik english cross lingual is planned but not out yet, maybe @aru yi would be able to correct me if I'm wrong tho.
Reactions: poser and aru ii

I’ve liked Yuyao for a long time now and I want to support the crowdfund, but the engine being unknown makes me resist from doing so. I’d prefer her to go to sv instead of ace, because of the lack of parameters and no English cross-lingual in the program. Also, didn’t the first teaser said that she will be in sv ai?
Reactions: TheStarPalace and PearlStarLight5

The first teaser got deleted, but they kept the one that says she's a SynthV in binary code

Wasn't it the other way around? the binary tweet with the crowdfund teaser is still around but the cipher one saying its SV AI got deleted. Either way yeah imo its still SV.

Well, I at least know it was one of the teasers, and the one that stayed is in binary code

I believe the binary code one doesn't actually mention an engine as part of the teaser; it only mentions there's a crowdfund (translated via QRT by xuu here).

The Caesar cipher one (which was deleted) decoded into English "YAO Synthesizer V AI". Though with their FAQ on the crowdfund mentioning cross-lingual synthesis in reply to if there will be English/Japanese capabilities, and they're still going ahead with an estimated shipping date of November 2022, their plans may still be going ahead; they just may not be allowed to outright state the engine for some reason? Hopefully if there was anything shady going on Dreamtonics would have made a statement by now.
Reactions: TheStarPalace and PearlStarLight5

Just dropping in to say that the logical conclusion is just "they jumped the gun on announcing the engine".

Given what happened before, I'd say it's very likely any company doing a crowdfund would confirm with the company (and ensure both parties have that confirmation in writing) before proceeding with the crowdfund. Considering that all they did was delete the tweet that specifically said "YAO Synthesizer V AI", and they're now saying they cannot confirm what engine she's going to be on right now, it's pretty easy to connect the dots and say that they didn't have outright permission to say she's going to be on Synthesizer V, but that the project can proceed as is. Since it was a cipher and not a straight up announcement they probably got off lightly, too. If they needed to change synths or there was some kind of issue they wouldn't have started the crowdfund already. The only other synth it could be based off the Q&A would be ACE, but I haven't ever seen a crowdfund for that synth.

We have actually seen this before, for Koharu Rikka! During her crowdfund all TOKYO6 said at first was that she would receive a singing synth voice database if she met the final stretch goal, and they confirmed it was Synthesizer V later.

TLDR: Very likely they just weren't allowed to say she's going to SynthV yet. The actual question is if her box will be available after!
Reactions: poser, morrysillusion, TheStarPalace and 4 others

I actually didn't know that was the case for Rikka. I saw in her original crowdfund page that she was intended for Voiceroid at first before something something she moved to CeVIO AI for speech, in hindsight as I've only known SynthV since just before Tsurumaki Maki came out.

The specifications on her faq page seem to be similar to the synthV ones, but that can be the standard since I'm not very good with computer specs ^^'''' I just had to go check ...

Voicemith is incredibly reliable and has been in the game for almost a decade. While I understand there is some lacking of clarity, I'm sure they are trying as best they can and could use our support! I'm planning on pledging and every small donation helps.
Reactions: TheStarPalace, Leon, nalondollie and 1 other person

Maxi said:
The specifications on her faq page seem to be similar to the synthV ones, but that can be the standard since I'm not very good with computer specs ^^'''' I just had to go check ...
Click to expand...

Yeah these are uh.... quite literally the same specs as Synthesizer V AI vocals (just checked my SOLARIA box to confirm, even the processor is the same). 99% she's a Synthesizer V AI vocal and they just aren't allowed to explicitly say that yet.
Reactions: pookapalooka, poser, TheStarPalace and 4 others
Show hidden low quality content
You must log in or register to reply here.
Share:
Facebook Twitter Reddit Pinterest Tumblr WhatsApp Email Link