Will run from December 23rd to January 31st, goal is 4 million yen.

Site will be Greenfunding, same site as Koharu Rikka's fundraiser (so overseas can't contribute, unfortunately; though I'll remind you now that Tsuina-chan's Synth V campaign is still ongoing as of this posting and can be contributed to by overseas fans).

​
Reactions: TheStarPalace, peaches2217, patuk and 4 others

Oh god its another one!!! Lol I guess I'll have to buy this one too now ugh... Well if this KotonoSync cover is any indication..

I think she has potential.. She has a quality and accent to her voice that makes her sound vaguely Yukari like, but with a slightly stronger singing tone. I hope they take the angle of making her a more powerful voicebank.


I'll take any synth v support I can get, but I really hope we start getting more voice types besides cute soft Japanese female eventually..
Last edited: Dec 21, 2020
Reactions: MillyAqualine, TheStarPalace, mahalisyarifuddin and 2 others

Honestly kinda... pleasantly surprised? with the number of crowdfunding campaigns. This never would have been possible with VOCALOID. Other than that, I'm really looking forward to her singing voice! She's one of my favourite VOICEROID banks, and I think she'll probably have a more mature tone than most of the other SynthV girls (bar Saki of course) so it'll give us a little bit more variety. Interesting that her goal is slightly lower than Tsuina-chan's, but I guess that she may have access to some funding from Seika town themselves, considering she's the district mascot. Wonder if they'll give her an AI vocal too as a stretch goal?
Reactions: MillyAqualine, TheStarPalace, Rylitah and 2 others

xuu said:
Honestly kinda... pleasantly surprised? with the number of crowdfunding campaigns. This never would have been possible with VOCALOID. Other than that, I'm really looking forward to her singing voice! She's one of my favourite VOICEROID banks, and I think she'll probably have a more mature tone than most of the other SynthV girls (bar Saki of course) so it'll give us a little bit more variety. Interesting that her goal is slightly lower than Tsuina-chan's, but I guess that she may have access to some funding from Seika town themselves, considering she's the district mascot. Wonder if they'll give her an AI vocal too as a stretch goal?
Click to expand...

SynthV, Vocaloid, CeVIO, I don’t think he engine matters so much as the devotion of the fans. Whatever the case, I’m very happy they’re getting so much attention! It’ll help introduce even more people to Voiceroid. Aaaaaaaaaaah I’m so excited!!

I DO think an AI bank is in the charts if they get enough funding. AHS seems to be headed that direction with Tsuina, so I can see them wanting to experiment with it more.
Reactions: TheStarPalace and patuk

The CF will be begin tomorrow at 11 am JST, but the page can be viewed already! 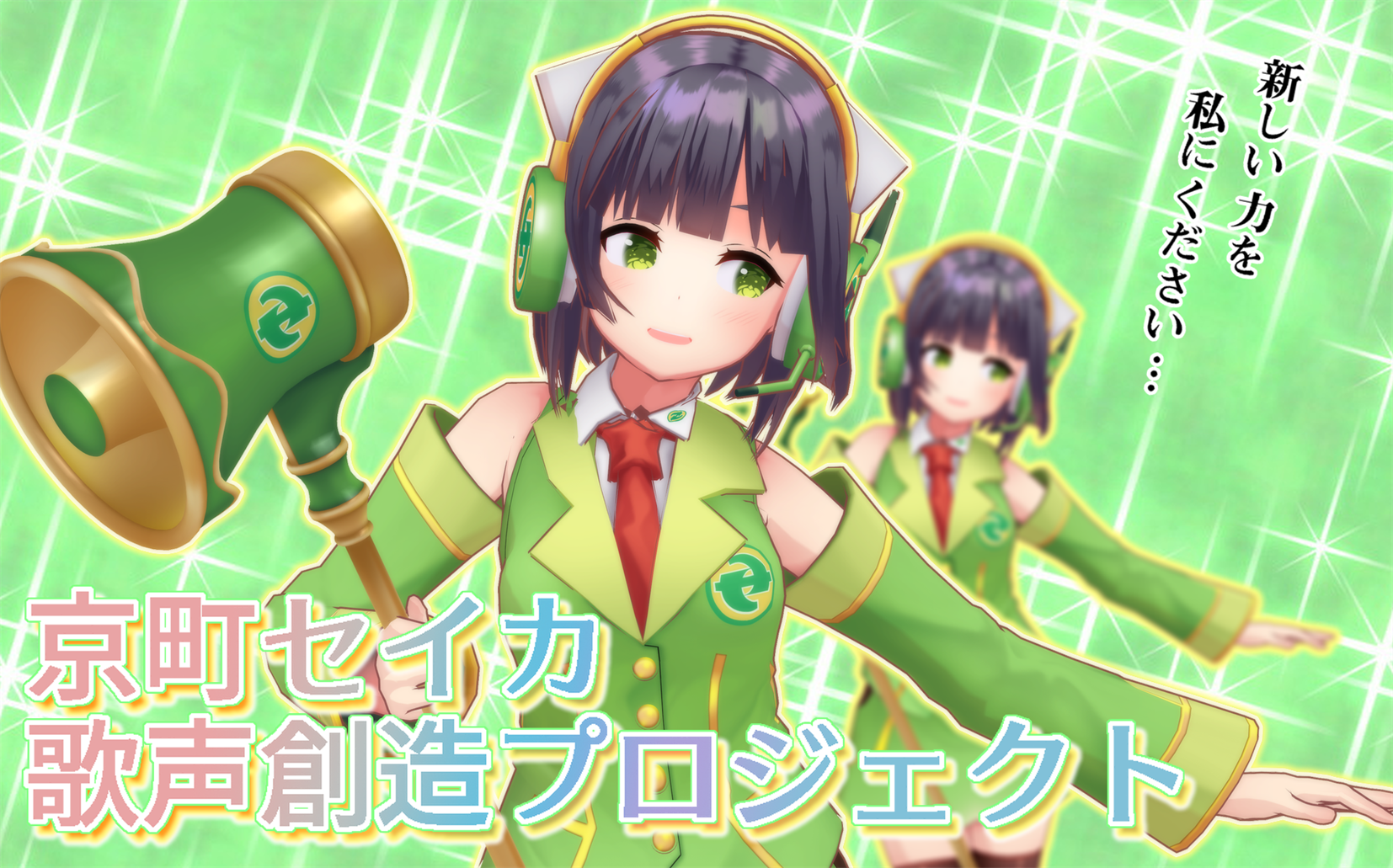 The main goal is set in 4 million yen and there are also stretch goals:

mahalisyarifuddin said:
The CF will be begin tomorrow at 11 am JST, but the page can be viewed already!

The main goal is set in 4 million yen and there are also stretch goals:

Wow, the final goal for an AI voicebank is almost half as much as Tsuina's.
It really makes me wonder how popular these Voiceroid characters are to begin with. At least on Youtube, Seika is practically nonexistant, are they really that big on NND?

Seika has the backing of the town of the same name in Kyoto Prefecture. I don't know the full details, but residents of the town who back the project with a pledge of 2000+ yen can have it deducted from their income/inhabitants' tax for next year apparently, as long as they do it before the 31st. She'll probably not have any issues being funded this way.
Reactions: sarielv, YOYo_MAMA, morrysillusion and 4 others

She will def be getting standard SynthV voicebank, she's not far from it, but do you guys think any of the stretch goals will happen :C ? Is it unrealistic to expect the 1st stretch goal happening?

It's little sad seeing this crowdfunder after having such huge succesful ones but it is true the rewards are meh :/

It's hard to say. She's definitely getting a SynthV vocal at this point, and I think she'll hit at least the first stretch goal without any trouble (it's only an extra 500,000yen) but hitting the AI stretch goal might be difficult. These crowdfunders tend to have a rush of pledges towards the end so maybe she will... I hope so at least. Thank god they're going to hit the initial goal though.
Reactions: TheStarPalace and patuk

Honestly, I think she’d be doing a lot better if her back in rewards weren’t quite so... region-specific. I understand why, of course, but anyone who doesn’t live in that area doesn’t get much unless they pledge ¥50,000 or more.

I really want her to succeed! I think she’ll sound beautiful.
Reactions: TheStarPalace, xuu and patuk

With 20 days remaining, Seika has passed her first goal! This means she'll be getting the Standard database at the very least. 2 million more and she'll get AI.
Reactions: peaches2217, patuk, Rylitah and 2 others

I think she'll be able to reach the AI stretch goal. Things were very slow for her at first, but now that Tsuina's campaign has ended, I hope Seika will get the traction she needs - I think them overlapping didn't help Seika very much to start with. I was thinking about it earlier today but didn't get the chance to post, but these are the reasons I think Seika's campaign isn't going as well as previous ones:

- Most tiers just benefit residents of Seika Town (as previously mentioned)
- For others, you don't really get much unless you pledge over $500 which is.... not easily dropped if all you want is her software (I didn't pledge to Tsuina's campaign since her Synth V get tier was $300 and I wasn't interested in anything else that came with it, so it was already a lot just then orz)
- Overseas can't pledge (small, but it is a bit of a factor; I saw some Western fans pledge to Tsuina's campaign that almost definitely would pledge to Seika's as well, but the site Seika used can't be pledged to by overseas fans)
- Overlapped with Tsuina's campaign, which if you're a software fan is like... $800 within a month of each other (Voiceroid fans drop a lot on Voiceroids but I don't think Voiceroid (or similar) campaigns have ever overlapped with each other like this before)
- Mentioned in status before, but Seika dropping this out of nowhere instead of building up hype for months beforehand probably didn't work out in her favor either orz

I do hope she'll do well when she releases; if she sounds similar to her Voiceroid, then she'll be a very nice mature tone that'll stand out among all the other cutesy ones (no offense to them, of course; I love the Kotonohas to death and will get Tsuina as soon as she releases), probably a good partner to Saki. Even if it takes the remaining 20 days, I think she'll be able to just hit that final AI goal -- at least it's only half of what Tsuina needed for hers.
Reactions: peaches2217, Tema, xuu and 1 other person

I agree and think she'll probably hit it now. Overlapping with Tsuina-chan's campaign was a bad choice but at least there's still another three weeks, which should mean people will be able to donate. What's even funnier is that residents of Seika Town apparently can't get tangible rewards, which I guess is why they had the tax deduction scheme. The points thing seem to have something to do with Seika Town promotion and you can redeem them for various rewards (10,000 for a copy of Seika's VOICEROID for example). Hopefully she'll meet her stretch goals soon.
Reactions: peaches2217 and Rylitah

With 15 days left, Seika needs about 1 million yen to reach the Synthesizer V AI database stretch goal. Hopefully there'll be an uptick in backers so she can reach it.

AI stretch goal has been reached!
Reactions: TheStarPalace, xuu, Blue Of Mind and 4 others