Announced earlier this year, RIME is the third product in the Musical Isotope series. Today her release date has been announced, along with showing a mockup of her box and a separate upload showcasing the voice.
She'll be releasing on October 25th 2022, and preorders are open from today (linked in the description of the below demo song). Her voice provider is RIM.


I know CeVIO doesn't really have any Korean capabilities, but with how RIM is promoted as singing in Japanese, English and Korean I had kind of hoped for something to spice RIME up to reflect this in some way.
Last edited: Jul 7, 2022
Reactions: WyndReed, YOYo_MAMA and nalondollie

If a RIME demo is to sing in Rimlish, the unique way of how RIM sings in English. It should be this song, my personal favorite among her Rimlish covers for obvious reasons.

Edit: I will call any english covers of RIME as her singing in RIMEnglish.

Rime has been growing on me a lot recently. I think she might be the ai bank ever
Reactions: MillyAqualine

I'm wondering if RIME will also have emotional parameters like SEKAI? or that is just an exclusive feature too expensive for 2 banks

YOYo_MAMA said:
I'm wondering if RIME will also have emotional parameters like SEKAI? or that is just an exclusive feature too expensive for 2 banks
Click to expand...

afaik from now on, starting with sekai, every vb is gonna have it.

was surprised to see something new from Picon, with RIME!

Reactions: nalondollie, peaches2217, blackout and 2 others

This Picon demo + that R Sound Design one... the vibes are immaculate. If there's one thing kamitsubaki gonna do is commission some good ass music
Reactions: nalondollie

morrysillusion said:
was surprised to see something new from Picon, with RIME!

Ok but she sounds more like chisa, rather than kafu

A new demo, this one features her MMD model

They sound so similar

KAFU fans are a shoe-in to be RIME fans!
Reactions: Aconito, MillyAqualine, WyndReed and 1 other person

I truly do not understand the appeal of having two vocal synths that both sound and LOOK just about identical to each other. Is it just because they're based on existing characters (... or, real people? "Virtual Singers"? I'm not really clear on who or what exactly these Isotope girls are supposed to be, if they're just fictional characters or stage personas or what) that people are interested in them? I guess it makes sense, CeVIO really does seem to be the most "Character First, Voice Second" of all the big synth engines. Which is... quite the accomplishment, now that I think of it.

At least Sekai stands out more, and hopefully Coko and Haru do too.
Reactions: Aconito, poser, MillyAqualine and 2 others

The isotope girls are basically stage personas for singers signed to KAMITSUBAKI STUDIO. There are quite a few of them, but this quintet that is getting CeVIO banks is their most popular group of singers that they've sometimes teamed up as a single unit under the "Virtual Witch Project" name.

There is some lore associated with all of the characters, and there's even a small game produced featuring the VWP singers.

I think what is more interesting to VOCALOID fans is that KAMITSUBAKI signs vocaloid producers to produce the albums for their singers. Kenzaki Iori produced both of KAF's albums, and after their release, they invited loads and loads of vocaloid producers to cover every song from each album. Basically, for these characters, the target audience is the very people that are already interested in vocal synths, which might explain why KAFU's popularity was so explosive. It also helps that the singers themselves, KAF in particular, have done well for themselves and garnered pretty wide appeal as far as "virtual singers" go. I don't know much else about KAMITSUBAKI itself, but I did really enjoy the remix albums in particular.

I hear and echo everyone's complaints about RIME and KAFU sounding too similar to each other, but I'm not sure I think their visuals are as similar as many have said. Both singers' designs have always been echoes/parallels of each other, and I think the designer did a good job of keeping their visual motifs similar while differentiating the color schemes, silhouettes, and costumes of the characters.

COKO and HARU should stand out the same way SEKAI stands out relative to KAFU and RIME, because despite all of them collaborating as VWP, RIM and KAF were the only vocalists intended to have the same motif/parallels.

EDIT: Here are the designs side by side. Extremely low quality image, lol. But it is late. Everyone is entitled to their opinion, but I really do think many have been too harsh on these two designs in particular. 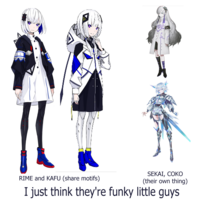 I like how KAFU and RIME share black and white, with inverted schemes, and they both have a contrasting color (red for RIME, yellow for KAFU). KAFU has a more chunky, extraterrestrial design while RIME's is more refined and incorperates those elements more like modern fashion. I really do think this is clever character design! I dunno!
Last edited: Aug 6, 2022
Reactions: TheStarPalace, Tortoiseshel, Leon and 3 others

I know it’s not impossible to get Kafu herself to sound like that (at least with outside editing), but as far as I can judge without access to either bank, it seems it’ll be a lot easier to get Rime to sound the way I’d want her to than Kafu, so her voice isn’t totally useless in my opinion.
Reactions: Tortoiseshel, Blue Of Mind, MillyAqualine and 1 other person

External formant shifting is also against KAFU's TOS, so there's that peace of mind too. Which is good!
Reactions: MillyAqualine, Leon and Twillby

Do people actually follow that rule though? I remember the general reaction when it was announced was pretty negative, and I don't blame anyone who was mad about it. At its core, it's an expensive musical instrument software, now with an arbitrary editing restriction