I woke up and remembered that if Tomoe gets an A.I.VOICE, then it will be compatible with Kotonosync and Kotonotone, so we could make her sing.
Reactions: peaches2217 and CdrSonan

uncreepy said:
I woke up and remembered that if Tomoe gets an A.I.VOICE, then it will be compatible with Kotonosync and Kotonotone, so we could make her sing.
Click to expand...

Mmm... imagine Tomoe's new voicebank duetting with Maki’s SynthV... that would be beautiful and almost poetic, I feel. In spite of unexpected hiccups, synths, and life, move on. I’m not all too attached to Tomoe, but put like that I’d 100% buy her AI Voice!

And now I ship them.

Looks like AHS spoke up about the situation? at least that's what I get from the machine translator hgfds


edit: but after skimming through it, it appears they're mostly clearing up things for the people who didn't know about the problems with her agency and are trying to clear their name
Reactions: mahalisyarifuddin

I saw a comment from the voice provider of Tsuina-chan + Ichiru (Voidol) encouraging Tomoe by saying she's done voices for more than one synth and to make as many cute voices as she wants.
When I think about it, Koiwai Kotori has been the VP for Vocaloids, Voidol, Neutrino.
But none of them have the controversy attached + 3 companies being involved (AHS, AI Inc, her handlers who declined the collab for a Maki remake).

I think AHS was a bit vague, but they explained about having to make the decision to switch voice providers + said Tomoe's new bank would preserve her voice differently due to the new technology.
I kind of hope we get more of an explanation from either AI Inc or AHS during one of their live streams or a news post. But it looks like the only ones standing in the way of this project being completed would be angered fans.
Reactions: morrysillusion, luwo, mahalisyarifuddin and 1 other person

Noticed they updated their demos to include labeling that Nozomi and Seiji have "DNN compatible" labels by their names. If you check mark DNN音声辞書を利用する, it uses their AI dictionary.
Scroll on this page:


By the way, I made a thread with a video and review of AITalk Web Yomishokunin and compared it to VOICEROID/A.I.VOICE + explained AI Inc's explanation of how TTS is used to make text-media more accessible to people (the aged, those with dyslexia, trouble reading, etc):

Users will be able to buy Yuzuru and the Kotonohas from DLsite in a few hours:


Also, I changed the name of this thread.
Reactions: CdrSonan

Tomoe did a live stream talking about the results of the survey:


I'll watch it and add notes, I guess.

There were a whopping 7,370 respondents. Tomoe thanked everyone many times and even made a toast.

There were about 5,000 written responses on the survey.
The survey basically had 3 options (make a commercial product, make it for a limited amount of people, or don't make it), but it ended up just becoming a yes or no opinion.
People thinking of Tsurumaki Maki as a Voiceroid (TTS software) VS Tsurumaki Maki is a character that includes her voice (if it's not Tomoe's voice, it's not Maki!!)
Whichever is fine VS This voice is absolutely no good = absolutely incompatible!!!

However, both groups had an agreement (both groups as in "make a new character" vs "don't make a new character"). They don't want to fight with people who disagree.
There were opinions on doing what she wants because she's free to, opinions based on a business point of view. She even mentioned it was amazing that opinions from overseas Voiceroid fans were submitted. There were a small handful of people very angry about the company they didn't like (AHS or AI Inc).

Gonna split this post cause my computer's getting wonky.
Reactions: CdrSonan and GreenFantasy64

Some respondents wondered why they made the survey. (She was really torn and didn't want to make people mad by making a voice bank.)
Some said it was fine because she's a voice actor/it's work, she should make a Tammy A.I.VOICE or some other character if she wants to.
Tomoe admitted that various things were decided while she was unaware. It made her sad and she thought everyone else must have been as well. It turned out that this was the general consensus of feelings from the survey.
Voice actors change during anime or for stage dramas. 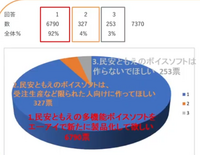 Orange = 327 people wanted them to sell the new A.I.VOICE to a limited number of people
Grey = 253 didn't want her to make/sell a voice
Blue = 6,790 people want an A.I.VOICE
She knows a lot of people replying to the survey are Tammy fans, so having an A.I.VOICE will increase her number of fans.

Opinions for wanting an A.I.VOICE = Upgrade to her voice software is desired since Maki was made so long ago, want more choices of voices of voice types for TTS (even if not a fan of Maki), Tomoe's voice is easy to listen to.
Mentioned AHS's Tomo writing on Twitter that more variety is good.
People said they want to use her voice for videos/streams.


Just wanted to mention that she sounds a lot happier/confident in this video compared to the original one.

I need a break from writing this, will check out the other half of the video later.

Reactions: Blue Of Mind and CdrSonan

I wonder if AI Inc will know based on the feedback from the Tomoe survey how many foreigners are interested in A.I.VOICE, since she mentioned getting messages from them. I really hope that we are able to buy the English/Chinese voices in December and not AFTER December because I am dying of curiosity about them.

I doubt they will give too much weight to the survey itself since (I assume) Tomoe didn't mention how many of the replies came from overseas
But still, more exposure can only be good, and it should make the AiVoice staff think more about the English voices
Show hidden low quality content
You must log in or register to reply here.
Share:
Facebook Twitter Reddit Pinterest Tumblr WhatsApp Email Link