Decided to create this poll just for fun. Which official Racing Miku design is your favourite? Feel free to tell us why too.

Although Miku has been a mascot for the Goodsmile Racing team since 2008, the first official Racing Miku derivative didn't appear until 2010 and since then, a new design has been adopted each year.

You can vote for two choices. To keep it simple I've only included the main visuals (excluding thai/summer etc. derivatives). 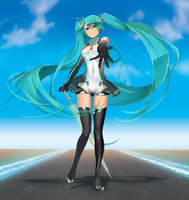 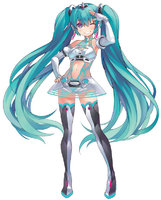 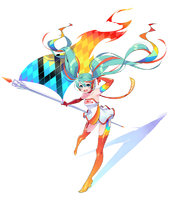 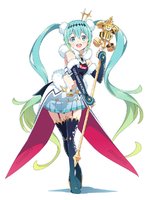 I really like 2010 because she's actually dressed like a member of the pit crew, but I feel like a number of her proportions aren't quite right...though that may be an issue with my eyes or the art, rather than the design itself.

Why does 2015 have a lance? Does the Goodsmile Racing Team have Ben-Hur-style chariot races with their race cars?

The bright colors on 2016 are awesome.

I voted for 2014 and 2015, I always liked these designs a lot.
But my favorite Racing Miku design is a deriative lol. It's the 2013 Racing Miku Sepang Version. My god she looks so good with the tan skin, the heart buns and those cyber wings. I love her.

2017's my favourite! The art style leans more towards shoujo than the other designs, and the butterfly theme makes the design unique.

I forgot to share my favourites, so here we go.

I too found it difficult to choose only two, since each design has it's own charm. All the designs are good and appealing in different ways.

In the end one was easy to choose; 2012 is my all time favourite, I like the futuristic vibe of Miku's costume. Also I find GAN's art style very appealing (and who could resist that cute winking expression of the main visual?)

My second choice was a tough one, but I ended up with 2017. The design is super cute and different. Also I like Tony's style.

Probably 2012 and 2016 (I'm a sucker for rainbows), but 2013 is really high up there, too. Unlike with Snow Miku, which is super hit or miss for me, I like most of the racing Miku designs to some degree.

I'm surprised that I'm the only one whos favorite is 2011. Why? Well, in my early Vocaloid days I discovered this costume first as the model of a fan PV by xtokashx for "ARiA" by tokuP, which is one of my all time favorite songs.
I also have its Goodsmile Premium Figure.

My second favorite is 2017 because I like Tony's art style and character designs a lot. I wish there was a pretty body pillow cover of this but the only one I found looks like a loli. Not my type.

Oh, she's not on this poll, but 2020 has WON MY HEART as my new favorite. I know some people on this forum thought she was bland but what can I say, I LOVE IT! I preordered the nendo for her and I never usually preorder figures.
Show hidden low quality content
You must log in or register to reply here.
Share:
Facebook Twitter Reddit Pinterest Tumblr WhatsApp Email Link